I once was Lost and never found, twas blind...

I saw the final episode, and it's just as I suspected all along: everybody was dead. I'm not sure when they died exactly; in the plane crash I suppose. Which means that everything that happened post-crash was a sort of purgatorial phantasm. Which further means that viewers and characters both have been seeing dead people. I can only hope that the transition between this life and the next one won't really be drawn out to six seasons worth of TV shows with summers between. In the end, they were all gathered in a church somewhere (except for Ben - don't know what his fate is) and when Jack's father opened the church doors a great white light poured in. None of them fell to their knees, though, so I guess the actual sight of heaven is not the smack-down moment I thought it would be. I got Lost somewhere between seasons 3 and 4, and I think the writers did too and started making stuff up while they decided what their series was really all about. I dare anyone to explain - rationally - all the twists and turns in the storyline so that they add up to the final result. Emphasis on the word 'rationally.' In capital letters.

This guy tries, but I'm not buying. His most telling line: After years of insane complication of plot and character, no ending could have “explained” the show in a wholly satisfying way, and it might have been better not to try. So he then writes a two page column trying. My advice: do not go into the light.

I do think, however, that Evangeline Lilly is something of an angel and ought to be resurrected so that she can appear in as many TV shows, movies, and commercials as possible. She doesn't even have to do anything. Just look at the camera. 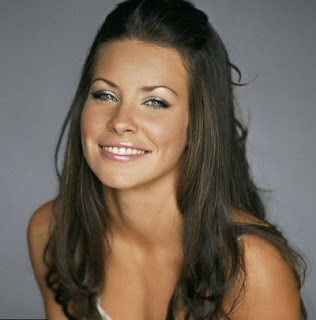 I saw her interviewed on The View, and she said she wants to write screen plays, get married and have babies. More power to her.

People magazine opined that the Lost episode went from a chess match to a game of checkers. I agree. I think the "we're all dead" ending was kind of a lazy way to go.

Melissa Wiley had some interesting thoughts on it though
http://melissawiley.com/blog/2010/05/24/lost/?utm_source=feedburner&utm_medium=feed&utm_campaign=Feed%3A+bonnyglen+%28Here+in+the+Bonny+Glen%29&utm_content=Google+Reader

"ending was kind of a lazy way to go."

You nailed it, Elena. Good to see you btw.

A snake in the last entry. A wondrous Eve in this. Will your next post be on particular varieties of apple, Bill?

Thanks for your work. All the best, Francis

Can't read your post as my eyes continually fall to the photo of the bedazzling young woman.

"Will your next post be on particular varieties of apple, Bill?"

First I have to figure out where Adam fits in.

TS, get a grip. Words are more important than pictures.

"Words are more important than pictures."

Hmmmm. Tell that to Carravagio.

But Craig agrees with you about her. She really is lovely.

I loved Lost at first, but became impatient with it after awhile. Pulling rabbits out of hats is great for a bit, but you gotta move on from there. I think they took cheap ways out a lot of the time. It's why I hate books written in that "magical realism" style--I think it's just a fancy term for "write yourself into a corner and BOOM! make something completely unexpected happen so you can go a different way."

Not that I can write either way, but still.....

It kind of makes me glad that I never got hooked on the show - I would love to read a novelization of it some time, though. I do so much better with words than pictures, I prefer radio to TV and books to movies.....

Well, yeah, he had the talent so he had to do it. But if you had to choose between all of his paintings and the Bible, which would you choose? :~)

Interesting question. If I picked all of his pictures, it would be because they mean so much to me--but that may be because I have read the stories first....

And are we talking written word or written AND spoken word. Pictures for those who cannot read (or maybe will not read) are invaluable. But they do not, it is true, stand in for the words that explained them.

And then, too, there is the thing about one certain Word....