There's a snake in my garage. Writhed his way under a box before I could get hold of him. Excuse me while I do a little search on the internet to find out whether or not he poses a mortal threat.

[Update]: It appears the little fellow was probably one of these: 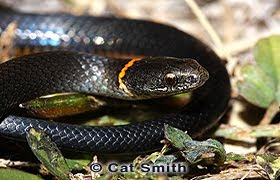 A ring-necked snake, that is, Diadophis punctatus punctatus, and nonvenomous. That means I can pick him up and pet him (when I find him) rather than take his head off with a machete. Oh, you think I don't have a machete. Well here it is, right next to the axe: 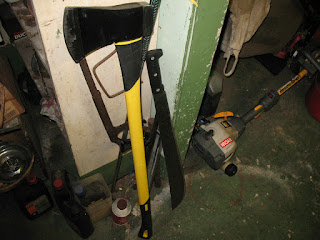 Sharp as a razor, too. It'll take down palmettos, weeds and small trees. I got the axe last summer and went around the yard slamming it into wooden things just to hear the sound of it. The backside can be used as a sledgehammer. Around the same time I got a saw that I really like. 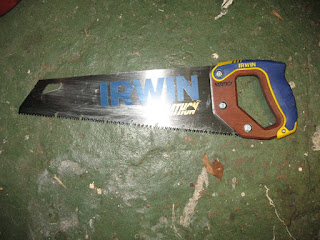 It will cut anything. If you wanted to be one of those serial killers who dismembers the body afterwards, this is the saw for you. Virtually zero spatter. It, along with a chainsaw, resulted in the sleek look of the camphor tree. 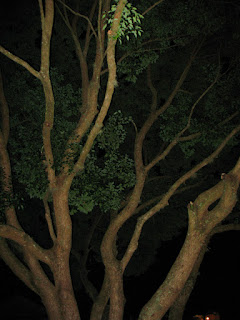 When I told my wife there was a snake in the garage, she freaked out. I tried to calm her down by informing her that the ring-necked snake is quite harmless and beneficial. It eats things you don't want around. I told her if she saw it to just pick it up and throw it in the bushes. It's not inclined to bite when handled. She just looked at me like I'd had too much to drink. Hard facts seldom overcome a fear of reptiles. I once saw her kill a gecko by spraying it with Raid. It was an awful death. I just hope I find that snake before she does. I probably will, because there's not much chance she'll go looking for it.
Posted by William Luse at 5:10 PM
Email ThisBlogThis!Share to TwitterShare to FacebookShare to Pinterest
Labels: home

You seem to have a lot of reptiles down in FLA. And bugs. The downside of living in a warm climate...

"Snake in the garage..."
A concept that makes our tedious, protracted winters much more appealing. I doubt if a subzero January morning would find me saying that I'd trade it in for Florida - knowing that Florida means SNAKE IN THE GARAGE! In all fairness, my husband's grandmother once shot a snake that entered her home in Michigan's UP - but I think that's a freak event.

We have the reptiles and bugs, you have the bats. (You do, don't you? When I lived in Maryland, we'd grab brooms just after sundown and try to knock the bats out of the air.) Alligators and snakes are the price we pay for year round good golf weather. To offset the reptiles, we also have lots of neat birds (although I watched an alligator eat a heron on the golf course).


Ellyn, can't remember if I told you about the time I opened the workshop to find another one under the washing machine. (Better me than my wife.) I killed it without firing a shot, but I think he was harmless. At the time I didn't know how to do a quick google. Don't know if there was a google.