Animal of the Month: the lover of dark places (part I)

Some of you probably saw this story. A woman in China (I know, it's a big country) went to the hospital "complaining of itching in the left side of her head." The docs took a look inside, then informed the woman that a spider was camped out in her ear canal. They flushed it out with a saline solution. They surmised that the bug had crawled in while she was sleeping. Here's what it looked like before they took it out: 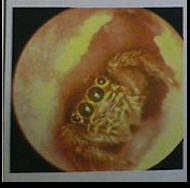 When the procedure was over, the woman "wept with gratitude." Of course. You would too. After all, what would you think if the inside of your head started itching and wouldn't stop? For five days. You'd be imagining all kinds of things, none of them good. You might even start banging your head against the wall, as this is an itch that cannot be scratched.

Now, let me tell you another story:

Long ago and far away and once upon a time, I was twenty years old and in the hospital recovering from a broken femur acquired in a car accident. It's the largest bone in your body, and mine got broken because some journalism professor at UF ran a stop sign. It was a Saturday, and I was on my way to the fraternity house in my VW bug to pick up a ticket to the football game. I still remember waking up to the aftermath. There had been a moment of darkness and then, distantly, I heard a voice at the driver's window: "Are you all right, son?" It was the journalism professor who couldn't read stop signs. Then another voice to my right, that of a student who'd come running from Graham Hall at the sound of the impact and the scream of wrenching metal. He crawled in on the passenger side. He said something but I don't remember what. In my distant haze I became suddenly aware of a terrible ache in my left leg. I looked down at it as though it hardly belonged to me. I thought to fix the ache, so I slipped my fingers beneath the thigh, forming a cradle, and lifted. I watched my knee drop about six inches and my lower leg and foot turn inward at an impossible angle. That's when the world began to spin and I passed out. When I woke the ambulance had arrived and the student was still beside me. He patted me on the shoulder and assured me I'd be fine. Then he withdrew so that the medics could drag me out. Of the hundreds of students in the vicinity, he was the only one who came to my aid. I had never seen him before and, of course, never knew his name.

There followed many months of lying on my back with my leg in traction. The usual treatment for such a break was to put the patient in a spica cast - which would have covered me from chest to knee on the right leg, and all the way to the foot on the left - and send him home. But since home was a thousand miles away, they drilled a hole in my leg, put a metal rod through it, connected some wires to the rod, ran the wires over a high bar at the end of the bed, and attached a weight to the end of each wire. This exerted a constant pull on the leg to keep the bone from slipping out of alignment. This is sort of what it looked like: 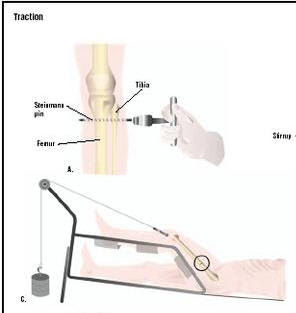 The doctors like it better this way because it would be easier to observe my progress (they like to be able to touch things) and because, they assured me, I would find the experience of having nearly my entire body cast-enclosed for a minimum of three months most unpleasant. In my case it would have been closer to six, because the bone was not fractured but completely broken in half, and at the midpoint of its length where the blood supply is weakest. With one other complicating factor: we redheads don't heal broken bones as quickly as you normal specimens. In fact, I had as a roommate for most of those first three months a rather distinguished man. He was a Florida state congressman by the name of Beck, nickname "Gator", and in line to become Speaker of the House. All that was put on hold while he recovered from the same injury I had. He was a short, stocky little man with a deeply resonant rumble of a voice that was born to please a crowd and he liked to laugh a lot. He had a steady stream of eminent visitors, and I got to meet them all. He never failed to introduce me. But this little old guy's bone healed up and he got out in three months while I had to continue in traction another three months at the university infirmary, where I had great nurses, my own steady stream of visitors from my former, superficially active life (I wish I had appreciated them more at the time), and the same doctors from the hospital checking in on me several times a month.

Two of those visitors were at first strangers. They came into the room one day and introduced themselves as Vicki and Patti. They hailed from the sorority Kappa Alpha Theta, and were performing good works, earning brownie points in heaven. Such duty was a requirement of the sisterhood, as I recall. They brightly informed me that they were there to help, if there was any such way they might, including just talking. Vicki was blonde, Patti brunette, and both were just as cute as college girls could be and I was always in the market for cute girls. I had a thing for brunettes and set Patti in my sights. My future sights. There wasn't much I could do at the moment, so instead we became friends. The two girls would bring me magazines, milkshakes, burgers and fries and other treats. I paid them, of course, but one day they brought me something as a gift and wouldn't take money for it: James Joyce's Dubliners. I don't think they had much of an idea who he was or where the book fit into the history of English fiction (neither did I, for that matter), but it was one of those that would have some significance to my future and I can still to this day thank those girls for it. I still have the book, too.

They spent a lot of time in my room. I don't know if they found the other patients they visited boring or undemanding or what, but they'd spend almost an hour with me just talking while I sucked down the milkshake or whatever they'd brought me, and I'll have to say it was unusual to be able just to talk with girls without anything else going on. Nothing overt anyway. I still had designs on Patti when I got out (it didn't work out, I should add), but for the time being all I could do was accept their friendship, so I did, and with a minimum to near absence of flirting - which would probably have driven them away - and I didn't want them to go away. I had to admit that I liked them. I was enjoying the experience of having girls for friends without the prospect of any further reward. I guess I can thank them for that, too. It paid off further down the road.

A couple months after making their acquaintance, their appointed day of the week rolled around (Thursday, I believe), but only one girl, Vicki, showed up. I was glad to see her but of course asked at once, "Where's Patti?" Oh, she said, didn't you know? I thought they might have told you. Told me what? I'm thinking terrible things, but then if something really terrible had happened, Vicki wouldn't be here. Patti, she continued, was here this morning. At the infirmary. In the wee hours.

What happened was that Patti had awakened at two or three in the morning with a splitting headache. She took aspirin, lay back down, but it wouldn't go away. In fact, it kept getting worse. She gobbled more aspirin, but it couldn't touch the headache. By morning, around six, she was being driven to such distraction that she was indeed on the verge of banging her head against a wall, but instead merely wept and moaned while holding her hands to her head and not letting go. So Vicki got her into the car and drove her to the infirmary where a doctor - the same one who checked on me almost daily, a GP - got her to drop her hands for a moment so that he could examine her. He looked down her throat, up her nose, felt all over her noggin, and finally flashed his little light in her ear. At that point he asked her to sit tight for a moment. Vicki held her while the doctor, unbeknownst to the girls, stepped out to make a phone call to Shands Hospital, where he made contact with an ear, nose and throat specialist. Though it probably seemed an eternity to Patti, this new doctor showed up in good time and told her that if she'd drop her hands he could help her out. He didn't use any anesthesia, as I recall, just took an instrument he'd brought along, and inserted it into her ear before slowly and carefully withdrawing it. I don't know exactly what kind of instrument it was - I keep imagining a very elegant and highly sophisticated pair of tweezers - but whatever it was had trapped at its very tip a modest sized cockroach that had crawled into the darkness of Patti's ear while she was sleeping, and could not turn around to get out. Its struggles had been the source of her pain, of which she was mighty grateful to be relieved.

Her visits resumed the following week, and the three of us spent the whole time talking about it. She was a sweet kid, and even then, at that stage of immaturity, I was able to realize that the sight of a woman in pain was hard to bear. I had not actually seen her suffer, but it was better that I hadn't. The imagination is powerful enough to extract sufficient empathy, and I hope I was able to give something back to her that day.
Posted by William Luse at 3:37 AM
Email ThisBlogThis!Share to TwitterShare to FacebookShare to Pinterest

Gee, thanks, now I'm afraid to go to sleep tonight. If no bug gets into my ear (which of course never has happened and never will happen, right???), a nightmare about a bug surely will. Between this post and the "pest of the day" feature on weather.com, my bug-o-phobia is being kept well-supplied with material.

Oh, and I'm not done yet. Just remember to sleep with one eye open. Or is that one ear closed? The one not on the pillow.